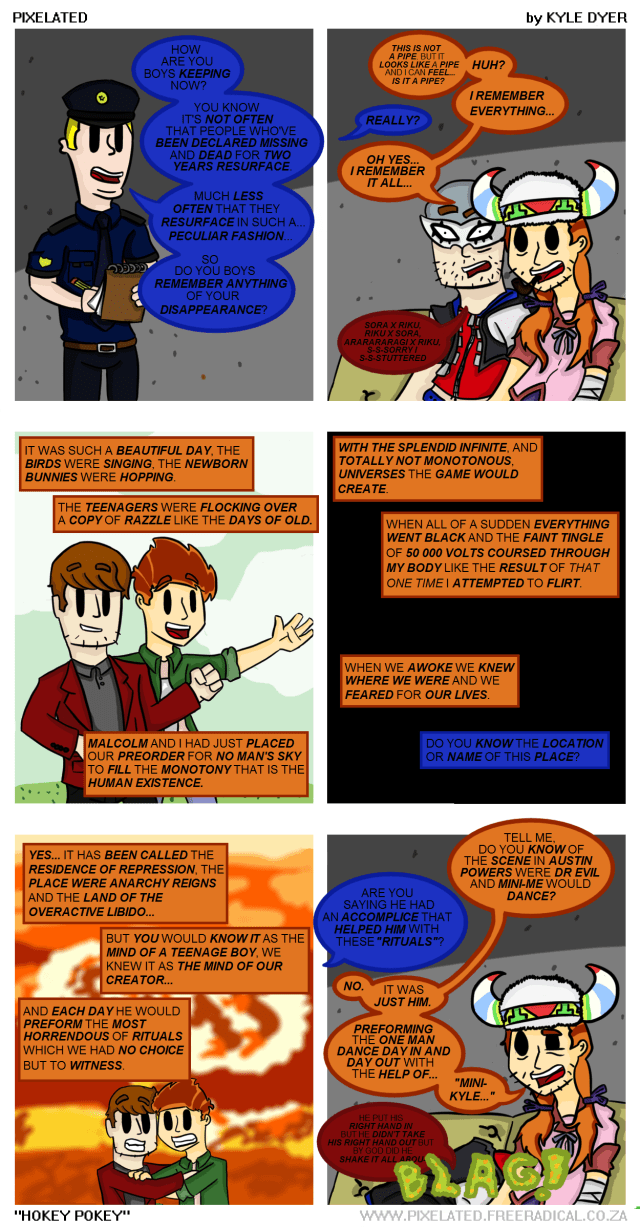 A RETURN OF SORTS:

Why hello there! It has been a long time since we’ve been in this situation, with a comic being posted on time hinting at the idea of a regular comic schedule. Speaking of schedule; I have decided to try and post a comic ever Friday as I am now at a point in my life were I can attempt such a thing and I would also like to try and add more content to the site in the form of recommendations and the ‘What my brain matter is currently perplexing’ section in which I talk about what interests me (whether that be gaming news, my attempt at critiquing media or just current events). I will attempt to upload either a recommendations or Wmbmicpo (that acronym just rolls of the tongue does it not?) on a Tuesday.  Here’s hoping it all goes swimmingly

WHERE THE STORY IS AT:

This comic was my attempt to bridge the gap over the last year and 3/4’s as I stopped updating the site on a regular basis when I moved to the UK in November of 2015 (though I stopped updating the comic around mid-September of the same year as I left South Africa to stay in Los Angeles before heading to the UK) and I did not give careful thought about how I would put the comic on hiatus so I left it in the void, packing the characters and plot into a nice, cramped condo within my mind were they dwelled till around July of this year when I posted ‘Great Again’ and my interest in doing a webcomic sparked again.

So were does that put us with the story? Well Tim and Malcolm are back, to say the least, and the next few comics will focus on them rejoining society after overcoming the handicap of technically being dead, an impressive feat I think you’ll agree. The style of my art has also changed to a more Ligne claire style with influences from manga and retro cartoons from the 1950’s, hopefully this is to some liking as my previous art felt to reminiscent of my attempts at a more dense and live-like character design (in vain of the popular webcomic style at the time) as well as the characters changing in personality to avoid the ‘wacky protagonist and best friend come straight man’ archetypes to a more balanced and shared level of crazy between Tim and Malcolm. This, I hope, will lead to interesting situations caused by either character instead of just Tim all the time.

You could call this a soft reboot as the story and bulk of the characters design and personality has changed drastically though the previous storylines remain a part of the characters past but their lives have started off anew with a host of new characters I hope to introduce. I hope you too are excited to see were the comic goes from here.

So till the next time

I hope you will enjoy my work, stay excellent.