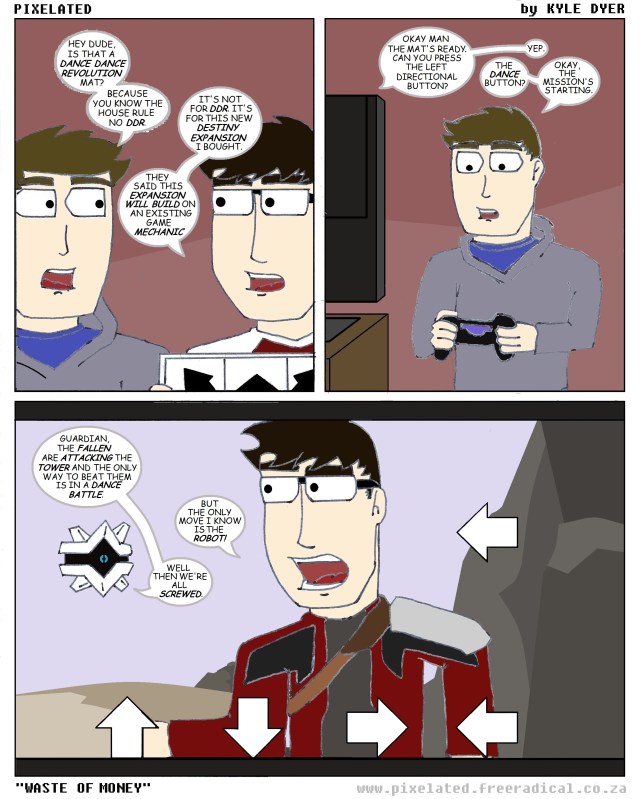 Well there you go. The first strip for the reboot and it doesn’t look half bad if you ask me. Bare in mind that I did the colouring in paint so it will look a tiny bit messed up, but other than that it should be fine. So the guy on the left in panel one is Malcolm and then the guy on the right is Kyle (just for extra information) Also if you could recommend Pixelated to anybody I would be most grateful.

Handhelds have always been a part of my gaming life. So when I tell you it’s one hell of a handheld I mean it. What you want more info? You’re not taking my word? Fine you greedy people I’ll tell you. The graphics are by far the best you can get on a handheld and the buttons are sleek and responsive. The only game I bought for it was Sly 4: Thieves in Time, I know it’s a bit of an odd choice but it’s the only one in the series I hadn’t played. The graphics are toned down but it plays like it would on the old PS3. The rear touch pad  is a nice touch (get it? Touch? Oh nevermind) and the front touch screen works like a charm. The other good thing is that from the moment I unwrapped the box all I had to do was charge it for like two hours and go through a one to five minute setup. My only problem was that it didn’t come with an English instruction manual which can be found on the in box easy setup disc. So in total if your looking for a good handheld with good graphics  and a semi-wide variety of games the PSVITA is the one for you.